Together with an increased intake of carbohydrates, Lonza’s (Basel, Switzerland) Carnipure tartrate ingredient was shown to increase L-carnitine content in the muscles in recreational athletes.

Together with an increased intake of carbohydrates, Lonza’s (Basel, Switzerland) Carnipure tartrate ingredient was shown to increase L-carnitine content in the muscles in recreational athletes, according to a study published in the Journal of Physiology.

“These findings, together with previous findings, demonstrate that Carnipure supplementation may lead to a decrease in the production of free radicals, less tissue damage, and reduced muscle soreness after exercise,” the company says. It also notes this means Carnipure may be suited for both supporting exercise performance as well as exercise recovery.

The randomized, double-blind, placebo-controlled study involved 14 healthy male volunteers who, on visits separated by 12 weeks, performed cycling exercises at various levels of intensity (30 min at 50% and 80%). Muscle biopsies were taken at rest and after exercise. During the trial, volunteers were either given an 80-g control dose of carbohydrate or a supplement of 2 g of Carnipure (L-carnitine-L-tartrate) and 80 g of carbohydrate.

The researchers reported that total muscle L-carnitine content increased from baseline by 21% in the CarniPure group but was unchanged in the control group. During low-intensity exercise, increasing muscle L-carnitine content led to glycogen sparing and increased fatty acid oxidation. During high-intensity exercise, it led to a decrease in anaerobic energy production, including a decrease in muscle lactate accumulation.

“This is the first study in healthy humans showing that muscle L-carnitine content can be influenced by dietary means and that L-carnitine plays a dual role in skeletal muscle fuel metabolism during exercise that is dependent on exercise intensity,” stated Paul Greenhaff, PhD, the study’s lead author.

Previous studies had been done to study Carnipure’s effects on increasing fatty acid oxidation in a nonathletic population, but the company says this new study is the first to show the same effect in recreational athletes. 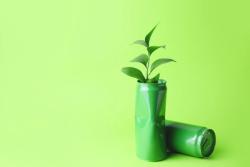 Energy drinks in 2022: Sustainable, natural, and making a difference