Natural Products and Women's Health: A Report from Vitafoods

MEDICAL RESEARCH OFTEN OVERLOOKS the needs of women, who tend to be underrepresented in some types of clinical trials. An exception may be the field of dietary supplement research. Several companies that supply raw materials shared new data about the effects of natural products on women's health at this year's Vitafoods conference, held May 5–7 in Geneva.

MEDICAL RESEARCH OFTEN OVERLOOKS the needs of women, who tend to be underrepresented in some types of clinical trials. An exception may be the field of dietary supplement research. Several companies that supply raw materials shared new data about the effects of natural products on women's health at this year's Vitafoods conference, held May 5–7 in Geneva.

On May 6, Sophie Lafay, PhD, scientific manager of Naturex SA's (Avignon, France) Actifs Innovants division, conveyed the results of several clinical trials that support the company's new Lifenol ingredient, an extract from hops (Humulus lupulus) that is standardized to contain the flavonoid 8-prenylnaringen (8-PN). Naturex plans to position the ingredient as an alternative to soy isoflavones.

Lafay noted that in two double-blind, placebo-controlled trials that lasted 6–8 weeks, women who took a 120-mg daily dose of Lifenol experienced a more than 200% reduction in general menopause symptoms and a 400% reduction in hot flashes, compared with the placebo group. Lifenol's research portfolio also contains one clinical safety study and another clinical study that analyzed the variable responses of individuals to the extract.

Although hops, a common flavoring for beer, is a very well-known food ingredient, researchers are just beginning to understand how hops might affect women's health.

"During the past 50–60 years, the number of scientific publications regarding the health effects of hops has increased significantly," Lafay said. "In vitro studies show that 8-PN is the most active phytoestrogen in hops." She added that 8-PN appears to specifically react to alpha-estradiol receptors.

According to Lafay, Lifenol may be a useful approach for women who are interested in natural approaches to dealing with menopausal symptoms but who aren't particularly interested in soy-based products.

"We needed to answer a real demand from women who don't know how to deal with menopause and hot flashes," Lafay said. "The aim behind Lifenol was to develop an answer that is both natural and safe."

Another company that presented research related to women's health at the conference was Linnea SA (Locarno, Switzerland), which supplies the Norway spruce (Picea abies) extract HMRLignan. On May 7, Marco Cosentino, MD, PhD, an associate professor at the University of Insubria (Varese, Italy), gave an overview of the latest research involving the extract, which contains the enterolactone precursor 7-hydroxymatairesinol (7-HMR).

In January, Linnea received a first-place award at the Scripps Integrative Medicine 5th Annual Natural Supplements Conference in San Diego for research showing that 7-HMR can lower the incidence of hot flashes by 53% in menopausal women.

At Vitafoods, however, Consentino described his own research with the extract, noting that it may have applications that extend beond women's health.

"The main interest in enterolactone, and lignans in general, is due to its structural similarity to estradiol, which gives this family of compounds significant phyto­estrogenic activity," explained Consentino. He added that 7-HMR also has antioxidant and antiinflammatory properties.

"The pharmacological profile of this substance is much more complex than that of a simple hormone substitute and provides suggestions that it may be used for several purposes, including not only the health promotion of women in menopause but also of the population in general," Consentino said.

Last but not least, a third company presenting at Vitafoods, Frutarom Ltd. (Haifa, Israel), unveiled research about SoyLife, a soy germ extract that contains high amounts of the isoflavone daidzein in addition to fiber, folic acid, vitamins, and phytosterols.

According to a 2008 abstract of the study that will appear in a future issue of the FASEB Journal, the 120-mg dose exhibited a significant protective effect on whole-body bone mineral density. 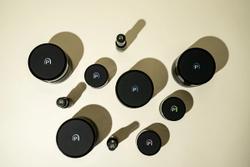