Food and Drinks for Bone and Joint Health

They’re not targeting who you think.

Considering the strong bone health and joint health needs of the aging population, it’s surprising that a large number of food and drink products promoted for bone and joint health target other populations instead. The baby food market is the biggest user of bone-health and “added calcium” claims. As for joint-health food and drinks, the greatest number of products point to our furry friends over in the pet food market.

The good news is that more consumers in the mainstream seem to understand the link between calcium and bone health. This has sparked more product development with mainstream positioning. Bone-health claims are more prevalent today, but the numbers indicate there is still a lot of room to grow. Just over 0.6% of global food and drink launches recorded by Innova Market Insights in 2013 featured bone-health claims. This figure goes up to 1% if we include “added calcium” claims. By contrast, food and drinks featuring joint-health claims are still few: just 0.1% of global food and drink launches.

Of the bone-health specialty brands targeting the dairy market, perhaps most notable is Calin from Yoplait, which has been on the French market for a number of years as a high-calcium, fresh cheese product. In France, the brand extended in 2011 with a Calin+ range of bone-health yogurts for women over the age of 55 and again in 2013 with the addition of two active-health drinks.

The Calin+ range also launched in the UK in summer 2012. In the UK, the brand is positioned squarely on a bone-health platform with the tagline “Calcium + Vitamin D for Strong Bones” prominent on packaging. The marketing, however, does not target older women as strongly as it does in France. Rival dairy brand Danone also has an offering: its Densia bone-health yogurt and drink brand in a number of countries, including Spain, Japan, and Brazil.

Other active-health drink makers are leveraging bone health to add value to their existing lines. Benecol, the cholesterol-lowering dairy drink brand with plant sterols, extended its product range in the UK in late 2013 with two dairy drinks, one of which is Benecol Plus Bone Health with added calcium and vitamin D.

Beyond dairy, bone-health claims are popping up in spreads. In the United States, the Smart Balance healthy spread range launched a Buttery Spread with Calcium. And in the UK in 2013, Dairy Crest added three functional-food lines to its Clover spreads range, under the brand name Clover Additions. Products include Clover Additions Strong Bones, marketed as rich in vitamin D and a source of calcium.

In 2013, pet food accounted for 80% of global product launches with a joint-health positioning. Once we exclude pet food, however, product activity looks highly fragmented. The next clear user of joint-health product claims would be soft drinks, accounting for just under half of total joint-health food and drink launches. Some of these soft drinks, however, may be positioned as supplement-style products. Joint Juice is one of the earliest examples. The brand launched the first ready-to-drink glucosamine supplement in the United States in 2001. Since then, it has added an Easy Shot variant, including Extra Strength Easy Shot in 2013 containing 1500 mg of glucosamine, 1200 mg of chondroitin, and the Hyal-Joint proprietary protein and collagen ingredient blend.

While food and drinks for bone and joint health continue to launch, it’s clear that the market, particularly for joint-health products, remains largely confined to supplements. Otherwise, products target specialty markets such as baby food for bone health and athletes for joint health.

Considering the aging population and interest in maintaining active lifestyles, there is a greater opportunity for these kinds of products in the mainstream market. Developing convenient products with a good taste profile is key to tempting consumers, particularly in the United States, away from dietary supplements and toward specifically formulated food and drinks. 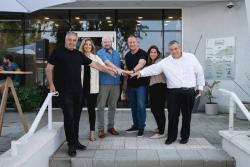