Natural and synthetic ingredients have long coexisted in the marketplace. Last June, I wrote about companies now making synthetic, or “nature identical,” stevia. Synthetic ingredients certainly serve their purpose. Cost-efficiency, scalability, and sometimes even environmental friendliness can give synthetic ingredients an edge over natural ones. Natural, however, sounds friendlier than synthetic or nature-identical. But is natural in fact better?

This debate is heating up over in the astaxanthin market. Microalgae-based astaxanthin suppliers recently banded together to form their own “natural” trade association, purportedly against makers of synthetics.

In general, astaxanthin suppliers started in the same place. That is, most began by supplying astaxanthin to the fish feed market. Synthetic producers like DSM and BASF still widely serve the astaxanthin market for feed, which is estimated at $250 million annually. Producing microalgae- and yeast-based astaxanthin is more expensive, so algal astaxanthin suppliers are targeting the human nutrition market, where the ingredient can fetch a higher price, explained Michael McCoy in an article for Chemical & Engineering News.

But these suppliers balked when DSM last year started marketing its own nature-identical astaxanthin for the human market.

Algal companies point out that their astaxanthin is distinctly different from synthetic versions, in stereochemistry, esterification, and the presence of other beneficial carotenoids. (Read more about the specific differences here.)

Are such differences a big deal? When it comes to some ingredients, stereoisomer differences can make a big difference, says Markus Lipp, PhD, senior director of food standards for the U.S. Pharmacopeial Convention. Take the drug thalidomide, which was once popularly a sleeping aid for pregnant women and thought to be safe-until the discovery that one of thalidomide’s stereoisomer forms-but not another stereoisomer form-caused birth defects. “The differences between two stereoisomers can be dramatic,” Lipp says.

“The thing that’s really irritating to us is that companies are marketing their synthetic astaxanthin ingredients as ‘nature identical,’ and it is absolutely not ‘natural identical’ [to the algal form],” says Gerald Cysewski, PhD, executive vice president and chief science officer for algal supplier Cyanotech.

But, he adds, “I guess there are no laws or regulations about what you can call ‘nature identical.’”

In a press statement released to Nutritional Outlook, DSM says science show its ingredient is safe and bioavailable:

“We are disappointed by the tone of recent media articles on astaxanthin-in particular, the characterization of synthetic astaxanthin such as DSM’s nature-identical AstaSana brand as being inferior in terms of safety and efficacy compared to other sources of astaxanthin. We believe the recent article was misleading, based on questionable research, and can potentially damage the nutrition industry as a whole.

“Synthetically produced essential nutrients, including vitamin E and vitamin D, are routinely found in today’s food supply chain and support the health and well-being of millions of consumers. DSM upholds the highest quality and safety standards for its ingredients-whether naturally sourced or produced as nature identical…DSM’s astaxanthin [has] undergone a formal approval by the Food and Drug Administration as an article of commerce in the U.S. food supply, unlike many of our competitors in the natural astaxanthin space. It has been used safely for decades and is supported by the most extensive safety data set specific to any single astaxanthin product. The safety studies performed by DSM for our astaxanthin set the safety standard for all other commercially available astaxanthin in the marketplace and has been referenced by natural astaxanthin producers.”

So, can synthetic be as good as natural? Or, backing up, is there even such a thing as “natural” or “synthetic”? Or are we just arguing semantics? After all, there are no formal definitions, and the boundaries can blur. Even crude oil, the basis for most synthetic ingredients, started as living matter, Lipp points out. Alternatively, some “natural” sources are no longer living by the time we extract their chemicals. So, can we still call those natural? As for benefits, there are cases when natural is better (e.g., harnessing the complex nutrient spectrum), and there are cases when synthetics are better (e.g., purity over crude extracts, in some cases).

Duffy MacKay, ND, vice president of scientific and regulatory affairs for the Council for Responsible Nutrition, expresses similar sentiment. “When considering natural and synthetic ingredients, it is not a black and white issue. Each ingredient needs to be evaluated on a case-by-case basis.

“There are some truly nature-identical ingredients, such as synthetic ascorbic acid, that are structurally and functionally interchangeable with their natural counterparts. However, there are other ingredients where a small change in a single chiral center (small change in the chemical structure) can have a significant impact on its function.”

What role do manufacturers play in this debate? Know your ingredients. Make sure you have data backing the safety and efficacy of your ingredient, whether it is synthetic or natural. And, the proof is in the studies. If, like natural astaxanthin suppliers, you have the efficacy studies to support the human health benefits of your specific ingredient, then that is black and white. And that is gold.

Recent articles in the trade media have called into question the safety and bioavailability of synthetically manufactured astaxanthin. As the world’s leading producer and supplier of this product, DSM would like to address these assertions.

Nature-identical nutritional ingredients can offer distinctive benefits. For example, nature-identical vitamins and micronutrients make it possible to nourish a large part of population who otherwise would not have access to them, resulting in serious health and socio-economic consequences. Nature-identical Vitamin A, C and D are routinely found in today’s food supply chain worldwide and support the health and well-being of tens of millions of consumers.

DSM stands fully behind its entire product portfolio and the science on which that portfolio is based. We uphold the highest quality and safety standards for our nutritional ingredients, whether these are naturally sourced or produced as nature-identical, as is the case with AstaSana™.

DSM’s purpose is to create brighter lives for people today and for generations to come. The provision of nature-identical AstaSana™ is part of that aspiration.

Related clinical and safety studies can be provided upon request. 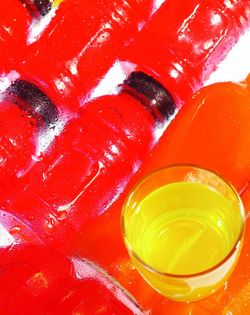