Phospholipids are lipid molecules that are widely distributed in animals and plants and that make up the major constituents of cellular membranes. Part of what makes phospholipids unique is that they possess both hydrophilic and lipophilic properties. Forming the phospholipid bilayer of cell membranes, they exert influence on the types of molecules that can pass through the cell. These features also make phospholipids attractive as carriers for nutrients and chemicals.(1)

Complexing molecules with phospholipids has been shown to increase the absorption and bioavailability of otherwise difficult-to-absorb compounds. These methods are commonly employed in drug delivery systems and are gaining recognition in the nutritional supplement space as well. Furthermore, certain phospholipids (including phosphatidylcholine and phosphatidylserine) may possess unique therapeutic benefits of their own.

Phospholipids Enhance Krill Oil Omega-3 Bioavailability
Preliminary research indicates that omega-3 fatty acids in the form of krill oil may be more bioavailable than omega-3s from fish and possibly other sources. The omega-3s in krill are bound to phospholipids, while those in standard fish oils are generally not. It is thought that this difference is a major factor in increasing the uptake of fatty acids in krill into various tissues.

Vanu Ramprasath and colleagues from the University of Manitoba (Winnipeg, Canada) conducted a crossover trial in order to evaluate the effects of two different krill oil preparations, versus corn oil, on the bioavailability of omega-3 fatty acids EPA and DHA in plasma and in red blood cells in healthy volunteers.(2) The study included 20 healthy adults who were asked to consume a low-phospholipid krill oil, a high-phospholipid krill oil, or corn oil daily, each for four weeks. Both krill oil preparations delivered 600 mg of total omega-3s daily, differing only in the amount of phospholipids.

Krill Oil for Knee Pain
Krill oil is a source of omega-3 oils that are naturally bound to phospholipids, which some researchers believe increases the absorption and bioavailability of the omega-3 fats.(2) Krill oilâsourced omega-3s have been found to have beneficial effects in previous research on cardiovascular parameters, markers of inflammation, and osteoarthritis.

In a recent study, researchers from Juntendo University (Inzai, Chiba, Japan) and the University of Michigan (Ann Arbor, MI) sought to evaluate the benefits of krill oil for mild knee pain in Japanese adults.(3) Fifty adults complaining of knee pain were randomized to receive 2 g/day krill oil or a placebo for 30 days. Two subjective measures of joint function in the form of questionnaires were employed, including the Japanese Knee Osteoarthritis Measure (JKOM) and the Japanese Orthopedic Association (JOA) score.

While both the placebo and krill oil group showed improvements in the JKOM and JOA questionnaires after 30 days, knee pain and stiffness as assessed by JKOM improved to a significantly greater extent in the krill oil group compared to placebo. The study results indicate that krill oil can be a beneficial supplement for reducing mild knee pain even after a relatively short period of intake.

Polish researchers recently investigated the effects of egg-derived phospholipids in patients with metabolic syndrome.(5) The study included 40 adult non-diabetic individuals with metabolic syndrome who were divided into two groups: one group supplemented with olive oil (15 ml three times daily), while the other group took an egg phospholipid preparation in the same amount daily for one month.

Phospholipid-Based Curcumin for Weight Loss
Phospholipid complexes enhance the delivery of several compounds besides omega-3 fatty acids. The uptake of curcumin, a normally poorly bioavailable component of turmeric, has been shown to be substantially improved when administered as a phospholipid complex.(6)

Francisco Di Pierro and colleagues from Italy recently conducted a study aiming to assess the ability of a highly bioavailable phospholipid-complexed curcumin to support weight loss in overweight individuals with metabolic syndrome.(7)

The study began with 127 individuals who were placed on a 30-day dietary and lifestyle intervention for weight loss. Of the 127 individuals who began the study, 44 people showing a weight loss of less than 2% were selected for the second phase of the trial in which they were administered the phospholipid-curcumin complex (800 mg Curcuma longa extract (95% curcumin) complexed with sunflower phospholipids, blended with 8 mg piperine (from black pepper)/day) or pure phosphatidylserine (400 mg/day) for an additional 30 days.

The curcumin group showed a weight loss of nearly 5%, a decrease in BMI of 6.43%, and a reduction of body fat of 8.43%. This compares to a weight reduction of only 1.88%, a body fat reduction of 0.70%, and a change in BMI of 2.10% following the 30-day lifestyle and diet intervention phase. The control group (phosphatidylserine only) did not show such effects. The results of this preliminary study show that a highly bioavailable form of curcumin can positively influence the ability to manage weight in overweight individuals. 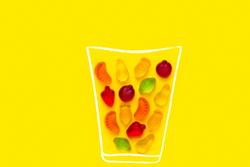