Protein Gets a Boost: Ingredients that Increase the Effects of Protein

But what do we really know about how these ingredients unlock protein’s potential-and what evidence do we have that they actually do so?

Protein is so popular these days that it seems nobody can get enough of it. Not getting enough protein can literally be a struggle, however, partly because certain factors impede our ability to fully digest and use the protein we consume. That’s why ingredients that promise to “boost” protein’s power are attracting more and more attention these days. But what do we really know about how these ingredients unlock protein’s potential-and what evidence do we have that they actually do so?

What Doesn’t Kill You Makes You Stronger

But for athletes and active types, protein serves a very particular purpose. As Jim Komorowski, chief science officer at Nutrition 21, explains, “During exercise, or just periods of heightened physical activity, muscle fibers are damaged, making them more susceptible to fatigue or injury.” Counterintuitively, it’s this fatigue that signals the body to begin a process called muscle protein synthesis (MPS), “which works to repair and replace damaged muscle fibers through fusing them together into new, strong muscle-protein strands,” Komorowski continues. “As these strands increase in number and thickness, they create muscle growth.”

To feed that growth, the body needs muscle tissue’s basic building blocks: amino acids. And “for those athletes pushing their bodies in training and performance,” says Baier, “dietary protein provides a source of these necessary building blocks to build new and repair existing muscle.” When dietary protein is insufficient, “the body turns to its own muscle tissue to meet the requirement for amino acids,” he says-which kind of defeats the purpose of muscle-building exercise in the first place.

A “common approach” he’s observed among athletes is to consume 1 gram of protein per kilogram of body weight “at a minimum,” Baier says, though he’s also seen recommendations for as much as 2 grams per kilogram for some athletes.

Indeed, Ralf JÃ¤ger, FISSN, CISSN, MBA, managing member, Increnovo LLC (Milwaukee), notes that intakes of up to 2.3 to 3.1 grams protein per kilogram of body weight per day “may be needed to maximize the retention of lean body weight in resistance-trained subjects during hypocaloric periods.” While emphasizing that optimal intakes for maximizing MPS will vary, he says that 0.25 gram1 of high-quality protein-that is, protein rich in essential amino acids and especially the branched-chain amino acid (BCAA) leucine-per kilogram of body weight, or an absolute dose of 20 to 40 grams, makes for a wise general recommendation. “These protein doses should ideally be evenly distributed every three to four hours across the day,” JÃ¤ger adds.

So, are gym rats and weekend warriors getting their fill? Given the surfeit of protein-packed products in workout bags, it would be puzzling if they weren’t. But either way, as important to athletes as the amount of protein they take in may be what their bodies do with that protein once it’s in there.

As John Deaton, vice president of science and technology, Deerland Enzymes & Probiotics (Kennesaw, GA), says, “Many athletes and active individuals are consuming more protein in one sitting than their bodies can effectively digest and use.” Whey protein, for instance-the gold standard for MPS thanks to its full complement of essential amino acids and the BCAAs leucine, isoleucine, and valine-requires hydrolysis to smaller particles within 90 minutes of consumption to be effective. Yet “it takes approximately 90 minutes for whey to pass from the stomach through the small intestine for digestion, absorption, and assemblage into a bio-usable form for muscle synthesis,” he explains. Undigested portions go right through the body, “rendering them useless to active individuals hoping to improve muscle recovery.”

What’s more, the body’s failure to hydrolyze whey protein into smaller bits leaves larger peptides in the digestive tract, where they produce the bloating, nausea, and cramping that plague many who consume a large amount. “Some may chalk up these discomforts to lactose intolerance, since whey is a dairy protein,” Deaton notes. “However, lactose isn’t present in whey isolates.” The culprit, rather, is the whey itself.

And even if smooth digestion and thorough hydrolysis were a given, there’s another potential barrier to athletes’ ability to pack in enough protein: “Consumers may just get tired of taking their regular high-protein products because they don’t like the flavor,” Baier notes.

No wonder “simply throwing large amounts of protein into the diet doesn’t necessarily accomplish the goals of optimizing recovery or muscle health,” he concludes. The key lies in shifting protein metabolism “in the right direction”-increasing protein synthesis while reducing protein degradation-“resulting in a net increase in protein for muscle growth and repair,” he says.

Protein marketers and sports-nutrition formulators have been looking for ingredients that give protein metabolism just that kind of nudge, as such ingredients promise not only to improve the efficacy of protein products, but to open a new arena of development for sports nutrition and protein products overall.

One such ingredient is Ã-hydroxy-Ã-methylbutyrate (HMB). Produced in the body during the metabolism of leucine, it’s “one of the most researched sports-nutrition ingredients,” Baier says, “and has mechanism-of-action data to support its benefit on protein synthesis as well as its minimizing effect on protein breakdown.”

How? It follows a “unique mechanism of action,” says JÃ¤ger, “having been shown to increase muscle protein synthesis via the mTOR pathway”-a signaling sequence that lets cells regulate their lifecycles-“while simultaneously inhibiting muscle protein breakdown via the proteasome pathway.”

By “shifting protein metabolism in a positive direction this way,” Baier says, HMB lets the body better use protein’s amino acids for muscle growth and repair. What’s more, it may help us better use plant proteins, which have an amino-acid profile and leucine content “considered less optimal for athletes and active persons,” Baier notes. “When HMB was combined with a plant-based protein in a recent study,” he says, “the plant-based protein performed more like the whey counterpart.”2

Researchers also see potential in the strategic use of digestive enzymes to jumpstart protein hydrolysis and extract more nutrition from “poorer-quality” plant proteins. In a double-blind crossover study published in 20153, protease 6.0, protease 4.5, peptidase, bromelain, and alpha-galactosidase “have been shown to reduce the significant quality differences between animal and plant protein,” notes JÃ¤ger.

Deaton’s company, Deerland Enzymes & Probiotics, addresses both hydrolysis and digestion with its ProHydrolase enzyme blend. “When consumed with protein,” Deaton says, the blend “encourages pre-digestion of the protein, allowing the release of the full content of essential amino acids for building muscle and improving muscle recovery.” And because pre-digestion cuts peptides down to size, it “reduces the potential for discomfort often associated with protein consumption,” he adds.

One double-blind, placebo-controlled clinical trial-submitted for publication to a peer-reviewed journal but not yet published-examined the enzyme blend’s effect on whey protein in 20 volunteers aged 19 to 35 with normal, healthy BMIs. Each subject took the whey/enzyme blend for nine days followed by an equal interval consuming whey alone. At the study’s end, researchers found that total amino acid concentrations increased significantly more-by 55 mg-after the whey/enzyme protocol than after whey alone. “In other words,” Deaton says, “taking whey and ProHydrolase provided 20% more amino acids than whey protein by itself.” Moreover, the product appears to be effective not only with whey, but with casein, soy, pea, and hemp proteins, too.

Probiotics have earned praise for promoting a range of health benefits in their hosts, and we can add one more entry to their bag of tricks: improving protein use. Specifically, Bacillus coagulans GBI-30, 6086-the patented strain that Ganeden markets as GanedenBC30-has a large body of research validating its ability to act on “a variety of endpoints,” Keller says, “including muscle damage and recovery, along with the absorption and use of protein sources.”4-6

Adds JÃ¤ger, the probiotic “can withstand the acidic environment of the stomach to reach the intestine where it germinates.” Following germination and activation in the small intestine, the strain seems to aid digestion of carbohydrates and proteins both, and “has been linked to an increased production of digestive enzymes,” he says.

As an added benefit, consumers are already tuned in to probiotics. Keller notes that 52% of the male and 54% of the Millennial respondents to Ganeden’s SSI survey said they were aware that probiotics could enhance protein use. Even better, upwards of 55% of respondents-and 83% and 70% of parents and Millennials, respectively-told SSI that they’d willingly pay more for protein-fortified products if probiotics were included. “This shows demand beyond athletes and sports enthusiasts for not only protein products, but ones fortified with probiotics,” Keller says.

The role of insulin in carbohydrate metabolism is well established, but its effects on muscle-protein metabolism-and the possibility that some substances can increase our cells’ sensitivity to insulin-are still being teased out. Studies7 do show that in the presence of sufficient levels of protein and essential amino acids, insulin appears to stimulate MPS while inhibiting muscle protein breakdown when protein and amino acid supplies are inadequate. And it also appears that the mineral chromium may boost insulin sensitivity.8

So in a human clinical study9 published this year in the Journal of the International Society of Sports Nutrition, scientists investigated the effects of Velositol, Nutrition 21’s branded chromium/amylopectin complex, on MPS. Using a double-blind, crossover design, the researchers administered either 6 grams of whey protein plus 2 grams of the chromium/amylopectin complex (WPACr) or 6 grams of whey protein (WP) alone to 10 subjects (six men; four women). After receiving their respective supplements, the subjects completed eight sets of bilateral isotonic leg extensions at 80% of their estimated one-repetition maximum.

Blood test and muscle biopsy results showed that the combination of whey and chromium-amylopectin doubled the MPS rate in subjects by 48% from baseline. “This was compared to a 24% increase from baseline when observing whey protein alone,” Nutrition 21’s Komorowski notes. Researchers concluded that “adding a novel amylopectin/chromium-containing complex to a suboptimal dose of whey protein magnified the increase in MPS from protein intake and resistance exercise.”

The subjects in the previous study consumed the chromium/amylopectin complex and whey protein supplement simultaneously, which may or may not have influenced its effectiveness. But the question of timing does emerge when considering how and when to administer a protein-boosting supplement.

For his part, Deaton says that “since protease enzymes work directly on protein to break it down,” his company’s enzyme blend “is most effective when taken with a protein supplement or meal.” Keller, meanwhile, says that while Ganeden’s probiotic strain “has science-backed health benefits even when consumed alone,” the company suggests “taking it when consuming any protein.” Finally, Metabolic Technologies’ Baier says that HMB’s action emerges whether ingested with protein or without-but he adds that recent research indicates optimal benefits accrue when vitamin D levels are “sufficient.” “Thus, the synergistic combination of HMB and vitamin D is recommended,” he says.

So it appears we still have a lot to learn about this field. Yet it also appears to hold real promise for consumers-athletes or not. As Baier says, “There are many populations that could benefit from improved protein metabolism and improved muscle health.” Perhaps these products can help them. 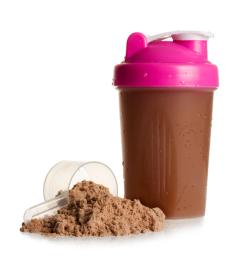