Whether or not you’ve experienced a UTI, the symptoms aren’t very fun. Here’s a tried-and-true natural ingredient for UTIs: the cranberry.

Cranberry
It would be wrong to say that urinary tract infections (UTIs) are trending. But the truth is that they are-statistically.

UTIs are, and have been, a persistent health concern for people of all ages-especially females. Over eight million doctor visits in the United States are related to UTIs each year, according to the Centers for Disease Control. Large population studies have even discovered a 10% rate of UTIs among women.

Whether or not you’ve experienced a UTI, the symptoms aren’t very fun. Here’s a tried-and-true natural ingredient for UTIs.

Regarding general health, the cranberry can do quite a bit, notes Steve Siegel, vice president of Ecuadorian Rainforest (Belleville, NJ), a supplier of cranberry.
“Before the exotic superfruit craze, cranberry was considered one of the original superfruits,” says Siegel. “Fruits with such brilliant colors typically contain phytochemicals which are good for the body; in this case, cranberry contains proanthocyanidins. These elements can benefit a variety of ailments, including diabetes and stomach ulcers.”

It is those proanthocyanidins that have much of the scientific community believing that cranberries-while beneficial for a variety of human health factors-can be of particular benefit against UTI.

As David Romeo, managing director at Nutraceuticals International (Elmwood Park, NJ), explains, “Medical researchers recognize cranberries for their natural ability to prevent infections caused by bacterial growth in the body. Using cranberry herbal support in your everyday routine can help with the prevention of UTIs by controlling the production of bacterial growth, helping to keep UTIs at a distance.”

Cranberries have a proven ability to fight off unwanted Escherichia coli. Just look at recent (and historical) science.

Cranberries and Clinical Research
In 1988, Schmidt et al. discovered that cranberry juice cocktail could prevent the adherence of E. coli to the urinary bladder wall. Years later, that theory was strengthened when research published in the Journal of Urology showed cranberry concentrate “irreversibly inhibits” P-fimbriae, the appendages that allow E. coli to attach to receptors on cell walls.

All of this seems to be possible due to cranberry proanthocyanidins. Research published in 2005 in the journal Phytochemistry pitted cranberry proanthocyanidins against those of grape juice, apple juice, green tea, and chocolate in order to see which ones could promote anti-adhesion of E. coli. Other than cranberry, grape juice was the only other nutrient source with the anti-adhesion effect; compared to cranberry, this effect was deemed minor.

Moving away from the petri dish, cranberry has shown a consistent ability to reduce bacteria in urine, reduce UTI recurrence, and even reduce the need for antibiotic treatment for women.

A 2009 trial on 84 young girls in Italy found that six months of consuming 50 ml of cranberry juice daily prevented UTI recurrence better than a probiotic drink of Lactobacillus GG and control. A total of 34 UTI episodes occurred in the study’s population, with 11 in the probiotic group, 18 in the control group, and only 5 in the cranberry group.

Science suggests that the fruit’s effect on bacteria is dose-dependent.

A Natural Alternative
Weighing cranberry against pharmaceutical treatment for UTIs, the fruity alternative still appears to be a viable option.

In a 2008 study published in the Journal of Antimicrobial Chemotherapy, Scottish researchers assigned 137 women (with two or more antibiotic-treated UTIs during the previous year) to 500 mg of cranberry extract (Cran-Max) or 100 mg of the antibiotic Trimethoprim for six months. The number of women in each group who required antibiotic treatment of UTIs was relatively close (36% in the cranberry group to 21% in the Trimethoprim group).

“Antibiotic treatments aren’t able to target specific bacteria, so you end up killing the good bacteria, too,” says Dean Mosca, president of Cran-Max supplier Proprietary Nutritionals (Kearny, NJ). He says the result can be a weakened immune system or potential for yeast infection.

“When considering the rising costs of a visit to the doctor and the effects of using cranberries as a treatment, it’s a no-brainer,” says Siegel of Ecuadorian Rainforest. “In addition, medicines that doctors prescribe to treat UTIs are often diuretics and can deplete the body of potassium and other minerals. Cranberries aren’t going to deplete the body of important vitamins and minerals; on the contrary they will actually add these to the body (vitamin C is an example of this).”

They’re Good for Men, Too
UTIs occur more often in women-it’s a biological thing-but men are no strangers to the condition. In fact, lower urinary tract symptoms (LUTS) can occur more frequently in older men.

Cranberries might help men, too. Last August, the British Journal of Nutrition published a study in which 42 men with LUTS (and at risk of prostate disease) were assigned to 1500 mg of dried cranberry powder daily, or control, for six months. At six months, prostate symptom scores and urinary parameters significantly improved with cranberry.

Cranberry, you have been around for so long and we are still just starting to get to know you.

Ocean Spray: Ocean Spray’s ingredient technology group just developed a fruit-sweetened dried cranberry (sweetened with pineapple). It’s an easy way to incorporate a sweeter cranberry into a product without including sugar on the ingredient label.

Cran-Max: The concentrate from Proprietary Nutritionals received UTI health claims from the Korean Food and Drug Administration and the French Food Safety Authority last November. Results of a yearlong study on 560 women supplementing with Cran-Max, probiotics, or a combination antibiotic are due to be published this year.

Cran-Gyn DDS: UAS Laboratories’ (Minnesota) combination formula of cranberry, probiotics, and D-mannose was awarded a Better Nutrition magazine Best of Supplements award for women’s health. The probiotics provide synergistic effect against bacteria, in addition to digestive and immune support for the all-around women’s health product. D-mannose is a sugar that has clinically demonstrated an ability to inhibit E. coli.

Sidebar: Soy-Free Isoflavones
Adding strength to soy’s health profile is soy’s isoflavones. One of these compounds, genistein, is being investigated for an increasing number of health benefits-including menopause relief. (The benefit of soy isoflavones can be had by consumers allergic to soy, as much of today’s ingredient offerings are synthetic and soy-free.)

A larger study produced a similar outcome in 2007 when 389 subjects were randomized to 54 mg of genistein or placebo daily for 12 months. Compared to placebo, genistein intake resulted in a 56% reduction of average number of hot flashes.

Industry is no stranger to these soy compounds, either. DSM Nutritional Products (Parsippany) is becoming a major player in genistein ingredient supplies, having recently completed its own study on genistein and hot flashes with its synthetic and soy-free geniVida brand genistein.

In DSM’s study, a total of 84 peri- and postmenopausal women were randomized to receive 30 mg of geniVida or placebo daily for 12 weeks. At 12 weeks, 62% of geniVida patients had experienced a 50% or greater reduction in hot flashes, compared to only 26% who reached the same improvement in the placebo group.
But menopause symptoms extend beyond hot flashes, ultimately increasing a woman’s risk of osteoporosis. 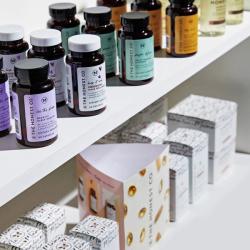