Dietary Supplement Ingredients to Watch: The Trends According to Julian Mellentin

The New Consumer
I find it hard to see people’s levels of expenditure in the Western world going back to the way they were in 2007, so I think what we’ll be struggling with is overall a nutrition market that’s relatively flat and shifting and polarizing between low-cost, broad-wellness products like multivitamins, for example, where people just know they have to have something, and on the other pole, products that can deliver a tangible, credible benefit.

The areas where there’s credibility-vitamin D, fish oil, glucosamine and chondroitin for joint health-they will continue to be healthy and grow.

Where I think there will be problems is in areas that fall in between those poles-products that are neither cheap, mass-market products nor clinically proven to be effective. And I think that unless you’re in one of those two camps, then your competitive position is going to be more difficult in years to come because people are going to be saying, “I want to spend as little as possible” or “I actually only want to spend my money on something that really works.”

Potential of New Ingredients
The good thing is that the people who buy dietary supplements and look for new ingredients are the most-informed part of the consumer market. They’re the 30% of the population who are the most health-conscious. These include the 10% of the U.S. market, usually older consumers, who have a medical condition and use supplements to help (the “healers,” as Health Focus International calls them); the 10% of the population of all ages who are committed to natural and organic and shop at natural product stores; and the 10% who are “investors,” people who don’t yet have a disease condition but who are starting to notice things going on and are making positive choices. This 30% of the U.S. population will be motivated by an ingredient. They’re the people who tend to go out and look for information about what ingredients will give them some positive benefit and some future protection. This is also your repeat-customer base.

It’s important not to lose sight of the fact that the great majority of the population, the mass market, the other 70%, are motivated by things like multivitamins, but their interest in new ingredients and the benefits associated with new ingredients is very limited.

The challenge is when you come along with new ingredients. There’s a long growth curve while you educate people about the benefits. It takes time, and that’s why the most effective ingredients will be the ones that consumers can feel the benefits of quite quickly.

Liquid Format
The biggest growth opportunity is going to be in liquid forms. Not everyone wants to take a pill. In fact, after the age of 60, a lot of people have difficulty swallowing pills. The liquid-supplement market is already a hugely well-established market in Asia, South America, and increasingly in Europe as well.

If you look at the joint-health area, you’ve got Joint Juice, Elations, and Osteo Bi-Flex, which is a leading pill brand, all selling liquid supplements, and they are really showing strong growth. I understand that the liquid-supplements area in joint health has gone from not much to over $100 million in the space of the past three years.

So, the biggest growth opportunity is going to be in liquid forms, and if you look at the bigger successes in energy drinks, 5-Hour Energy is a billion-dollar brand. The evidence is that people like a concentrated dose of an active ingredient, and they want it in a very convenient and ideally good-tasting form. In many people’s minds, drinking it is equal to taking a pill. They’re both equally valid alternatives.

I think anyone finding a way to deliver a daily-dose format in an individual way has got tremendous potential. You certainly see that in the area of protein, for example. Protein is rising in terms of people’s awareness, but people don’t want to chow down on huge chunks of meat. So there’s dairy protein shots now on the market, and they’re all in the experimental stage.

Relaxation and Stress
Health Focus International research showed that relaxation and stress are among consumers’ top personal concerns, so that includes ingredients like melatonin, valerian, and 5-HTP.

I think the market is very substantial but fragmented at the moment, and there’s still some question marks about the effectiveness of some of the ingredients or ingredient combinations that are used at the moment. However, I think that there’s a lot of scope for someone to come up with a truly effective formulation and deliver it in an effective way and market it well.

If people can find ways of delivering energy benefits from a fruit or dairy base-in other words, a natural way of doing it-and find a stimulant that’s as effective as caffeine but isn’t caffeine, those are all areas of ingredient research that are worth pursuing for companies, because you can create new segments of the market. If someone can crack the puzzle of a natural-source energy benefit that’s as effective in stimulation as the current energy-drinks populations are, then they’ve got themselves a new segment.

Ingredients to Watch: Game On 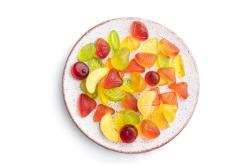