While research confirms the value of cranberry supplements, questions persist about how to measure proanthocyanidin content.

A 2011 study-led by Marielle A. J. Beerepoot, MD, of the Academic Medical Center in Amsterdam, The Netherlands-showed that daily antibiotics can outperform cranberry capsules at preventing recurrent bladder infections in women. So what’s the upside for supplements? They are less likely to cause side effects, including an increase of antibiotic-resistant bacteria strains in the body.

Beerepoot and her colleagues studied 221 pre-menopausal women for a year: 110 of them took a daily dose of an antibiotic, while the other 111 were assigned to a regimen of cranberry capsules twice daily. Four percent of the subjects on cranberry developed urinary tract infections (UTIs) against 1.8% of those on prescription drugs.

But, as early as one month into the trial, the researchers found that 86.3% of the women on medication yielded E. coli samples showing signs of resistance to the drugs. Only 23.7% of the cranberry-treated women were similarly affected.

For some observers, including Dr. Megan Schimpf, an assistant clinical professor of obstetrics and gynecology at the Perelman School of Medicine at the University of Pennsylvania, this makes the natural approach a viable alternative to prescription meds. Drugs are not the only choice, she emphasizes.

Nor are UTIs the only area in which cranberries may play a health-supporting role. Historically, the fruit, sometimes called the “wonder” berry, also has been used for such problems as wounds, diarrhea, diabetes, stomach ailments, and liver complaints. Recently, it also has been employed as a preventive to Helicobacter pylori infections that can lead to stomach ulcers, or to prevent dental plaque. There is even some reason to hope that its antioxidant content may have anti-cancer activity. And a 2012 study published in The American Journal of Clinical Nutrition found that participants who consumed a double-strength cranberry juice cocktail experienced “significant reduction” in arterial stiffness, an indicator of cardiovascular disease.

Let’s Hear It for the Girls

While many of these conditions are not specific to women, cranberries often are seen as a key element in supporting women’s health. Writing in WebMD Health News, Katrina Woznicki stated, “Urinary tract infections are more common among women than men. According to…researchers, one in three women has had a urinary tract infection.” Others note that women also face issues in digestive health, immune function, and maintenance of healthy yeast levels.

Tom Jones, senior manager, business development, for Lakeville, MA–based Ocean Spray Ingredient Technology Group (ITG), says, “Cranberry is a great example of how fruit can boost the health profile of a product, meeting the specific demands of the female market by offering the potential to maintain urinary tract health. With fiber, quercetin, and proanthocyanidins (PACs), the cranberry also plays an important role in supporting whole-body health.”

According to Marina Linsley, marketing director for NP Nutra in Gardena, CA, “Cranberries are known to be potent sources of antioxidants, specifically rich in a subclass of flavonoids called proanthocyanidins. These PACs are unique to and abundant in cranberries. The unusual PACs found in cranberries have an A-type linkage structure that sets them apart from most other vegetable and fruit PACs, and is responsible for their anti-adhesion properties.” These anti-adhesion properties help prevent bad bacteria from adhering to the urinary tract walls.

Expanding on the subject, Jones says, the North American cranberry (Vaccinium macrocarpon) contains unique A-type PACs. “In 2004,” he continues, “France became the first country to approve a cranberry health claim. The Agence Française de Sécurité Sanitaire des Aliments (AFSSA) stated that a daily intake of 36 mg of A-linked PACs contained in cranberries could help to limit the adhesion of E. coli to the urinary tract walls, helping to fight UTIs.”

Because of this health claim in particular, and the apparent importance of PACs in general, it is crucial for ingredient suppliers and their customers, the manufacturers of finished products, to be able to accurately measure the amount of proanthocyanidins in a formulation. Unfortunately, this is easier said than done.

Jones contends that there is no currently available, industry-acceptable, “robust” standard for measuring PACs in supplement ingredients. Instead, there are several methods, including gravimetric, colorimetric, and HPLC methods. Depending on which is used, he says, the result may deviate by a factor of five; in other words, one measuring system may show the presence of two units of PACs, while another suggests as many as 30.

The Ocean Spray executive emphasizes that the scientific community is divided over how PAC content should be measured. The two most prevalent methodologies utilized by the cranberry industry are BL-DMAC 4-dimethylaminocinnamaldehyde (Prior et al., 2010), and the European Pharmacopeia. “These are both colorimetric methods, but they deliver significantly different results,” says Jones. “Of these, the BL-DMAC method has gained favor, with key scientists and regulators recognizing it as a valid measurement of PACs. The EuraCran [European Association for the Valorization of Cranberry Extracts] method is based on the property of PACs to depolymerize under hot and acidic conditions to form anthocyanidins. These anthocyanidins are then measured to determine the PAC content of the sample.”

Problems arise, says Jones, because “naturally occurring anthocyanins can interfere with the measurement, potentially overestimating the number of PACs.”

To rectify the situation, Jones says, “Ocean Spray and Complete Phytochemical Solutions LLC of Cambridge, WI, recently announced their collaboration on a project to take the BL-DMAC methodology to the next level through the development of cranberry-based standards and a more sensitive quantitative measurement for cranberry PACs.”

At present, Jones continues, “The BL-DMAC method can underestimate the PAC content in some cranberry products, due to the use of the low-molecular-mass procyanidin A-2 standard to quantify PACs of different sizes and lengths. The new cranberry-based standards will more accurately reflect the diversity of cranberry PACs that include a range of sizes and lengths.”

Ocean Spray, which reported 2011 sales of $1.4 billion, is providing 100% of the funding for development of the new standard. Jones says, “We expect preliminary results from Complete Phytochemical Solutions by late summer or early fall.”

Once it is ready to go, Jones adds, Ocean Spray will share the technology industry-wide. “If the results turn out as well as we expect, we would try to have the method submitted to appropriate standards committees for their acceptance.”

The supplier says he knows of potential users of cranberry ingredients who currently have projects on hold because of the PAC testing confusion. “We believe the industry must rally around a single method to instill confidence in supplement manufacturers.”

While other suppliers also acknowledge the value of accurately measuring PAC content in order to monitor potency of cranberry’s presumed “active ingredient,” some take a more holistic approach, touting the value of the whole fruit, not any single component.

NP Nutra’s Linsley says, “CranPhyto has great PAC levels, and we like to promote that; however, we feel it’s also important to communicate the importance of cranberry as a whole synergistic fruit, rather than just as an isolated compound. There is an amazing variety of antioxidant compounds found exclusively in whole cranberries, and these plant chemicals complement each other and interact in a variety of ways that are still being studied by science.”

Commenting on Ocean Spray’s foray into standards development, she says, “We welcome all developments in the areas of research and testing and look forward to new discoveries and innovations by all members of the natural health community.”

Carver, MA–based Decas Botanical Synergies LLC says that in 2005 it became “the first cranberry company to standardize a cranberry ingredient to PACs-NutriCran90S.” Since then, it has developed other standardized powders and extracts, including Hi-PAC and CystiCran. In addition, says the company, it offers PACran, a single, compliance-friendly, 500-mg daily dose product that has been “clinically shown to support urinary tract health in two separate clinical studies.”

Nonetheless, says Dan Souza, the company’s senior director of sales and marketing, the French Food Safety Authority’s aforementioned authorized health claim based on 36 mg of PACs may not be as good a deal as some industry sources may think. He states, “As a result of the AFFSA claim, cranberry supplement formulators have been misinformed and have believed that total PACs are the most important feature of a cranberry ingredient to focus on, when in fact the single most important question a formulator should ask is ‘Is this cranberry ingredient clinically shown to support urinary tract health?’”

PACran, he explains, is not a PAC-based extract, but “an all-natural, 100% cranberry, whole-fruit extract.” Made exclusively with North American Vaccinium macrocarpon cranberries, the ingredient offers the entire spectrum of the cranberry-the juice, the flesh, the skin, and the seeds.

Regarding the new standards effort, Souza says, “I welcome the development and publication of [a] PAC method of analysis that is accurate, reproducible, cost-effective, and generally available. Formulators should be able to quickly and cost-effectively compare cranberry powders from competitive suppliers.”

Addressing the PAC claim approved by French authorities, Souza notes a contradictory position taken by the European Food Safety Authority (EFSA). He says this body has consistently cited a dearth of product-specific clinical evidence as the reason for denying health claim petitions based on PAC-based cranberry fractions.

The last word on PACs and cranberry has yet to be heard. In the meantime, it is impossible not to be excited by about the recognized health benefits of the “wonder” berry and the prospect of new scientific discoveries about its content and effectiveness.

A Different Kind of Cranberry “Cocktail”

Anyone who has ever taken a stroll down a grocery store aisle is well aware that cranberry juice is more often sold in a modified form, as opposed to 100% juice. One popular version is cranberry cocktail, a juice drink thinned with water and sometimes bolstered by sweeteners. Other strong sellers include cranberry mixed with apple or a cranberry/grape blend.

If cranberry mixes well as a beverage, why not as a supplement? That might be part of the thinking behind Cran-Gyn DDS, developed by UAS Laboratories Inc. in Eden Prairie, MN. According to Connie Falkenstein, RD, MS, MPH, the company’s director of marketing, “Cran-Gyn DDS combines a special probiotic blend with patent-pending cranberry fruit extract and natural D-mannose to deal with women’s health issues-urinary tract health, digestive health, immune function, and healthy yeast levels.”

She adds, “In formulating our product for women’s health, we felt that the synergistic combination of the cranberry fruit extract with D-mannose and probiotics provided an approach to women’s health that was not available with a single ingredient.” 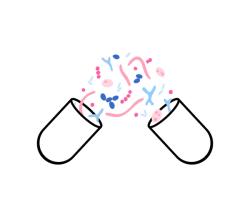