As awareness grows of gluten-related diseases and allergies, the gluten-free product market is expanding-albeit mostly in foods. Gluten-free cosmetics can still be difficult to find. And for those who need them, this can be frustrating.

As awareness grows of gluten-related diseases and allergies, the gluten-free product market is expanding-albeit mostly in foods. Gluten-free cosmetics can still be difficult to find. And for those who need them, this can be frustrating.

Millions of Americans have some type of gluten intolerance. (Gluten is found in all forms of wheat, barley, and rye.) Some have gluten allergies, while others may have a gluten-related disease such as celiac disease.

Those who have celiac disease are strictly intolerant of ingested gluten. For those with celiac disease, if even trace amounts of gluten are consumed, the gluten destroys the small intestine's villi, which are fingerlike nodules that absorb nutrients. This can result in symptoms ranging from headaches and gas to infertility, stunted growth, and depression.

Gluten sensitivities can range. Some people can react to even minute traces of gluten, which is why many with gluten allergies or diseases prefer to play it safe by avoiding gluten products altogether. Afterglow Cosmetics, a brand that markets gluten-free cosmetics, says, "If you have celiac disease, you may think that the ingredients in your cosmetics won't affect you. They may or may not. The real question is, why wouldn't you switch to a line of cosmetics that is beautiful, all natural, good for your skin, good for your body, and, (just in case!), gluten-free?"

Krull says that she may unconsciously touch her face, mouth, or forehead numerous times throughout the day, spreading trace particles of her cosmetics onto her hands that she could then possibly transfer elsewhere-for instance, to her husband's food as she is preparing it. "As we know, it only takes a few microscopic particles to cause damage, so a completely gluten-free cosmetic choice can take that level of worry out of the picture," she says.

Although many cosmetics do not contain gluten, finding cosmetics that are labeled gluten-free can be challenging. "Because many companies don't test their products for gluten, they are unwilling to say they're gluten-free," says Lani K. Thompson, one of the founders of the celiac disease–awareness Web site, www.celiacsite.com. A brand might not be willing to spend the time or the resources to guarantee that its products don't contain gluten, which can be spread from other products through cross-contamination on production or packaging lines.

"There are a lot of things out there that are gluten-free already," says Nancy Baker, director of education for the National Foundation for Celiac Awareness (Amber, PA). "It's just a matter of identification."

A few cosmetic companies do guarantee gluten-free cosmetics. Many times, these brands were started by people who either have gluten allergies/diseases, or who know people who do. Often, it's up to bloggers like Krull to seek out these brands and share their findings with the gluten-free community. A few brands that Krull suggests are the aforementioned Afterglow Cosmetics, founded by a woman whose mother and sister both have celiac disease; and Monavé, a mineral makeup brand launched by someone with celiac disease.

Krull says that typically it is smaller cosmetic brands that pay attention to the gluten-free customer. "Most mainstream cosmetic companies are there to sell products to the largest number of customers as possible," she says. "I have found that the organic companies, and just smaller niche cosmetic companies in general, make efforts for gluten-free customers. I've learned quickly that the big brand names you find at the grocery store or discount store aren't doing that much, except possibly labeling what's in their products. But even then, it isn't always easy to tell [what's gluten-free]."

On their Web sites, some companies list which of their products are gluten-free. Cosmetic brand Desert Essence makes it easy for customers to find its Desert Essence Organics gluten- and wheat-free line on its Web site. It also lists gluten- and wheat-free information on its packaging. "From our customer mail, we think there has been an increase in the number of consumers looking for gluten-free products," says Wendy Lucas, the company's vice president of marketing.

Logona Natural Cosmetics is another company that indicates its gluten-free products online. Company president Santosh Krinsky says, "We have been getting inquiries from consumers on this question [of which products are gluten-free] for several years now, and it has definitely increased over the last six months. I believe it is a function of consumers becoming more aware of this issue. In the past, many consumers assumed they could not even find such products and just gave up looking."

Other companies such as Burt's Bees and Smashbox Cosmetics will provide gluten-free product information upon request. In fact, that's one of the primary services that Krull provides through her blog-asking companies which of their products are gluten-free and posting those lists online.

However, she says, "Sometimes I don't really get an individualized answer, which can be frustrating if something I asked about is not addressed in a company's copy-and-paste e-mail answer for people who write in about gluten-free questions. That's why I learned that the big companies just aren't really playing the game for the gluten-free customers."

What does gluten-free mean?

FDA is currently finalizing its legal definition of the term gluten-free. The agency's final ruling was expected in 2008, but was delayed.

Many expect FDA's threshold to fall below the 20-parts-per-million threshold of the World Health Organization. This would mean that only products containing fewer than 20 parts of gluten per million parts of other content will legally be able to be labeled gluten-free in the United States.

"It's a miniscule amount, but that's how sensitive somebody with celiac disease is," says Nancy Baker, director of education for the National Foundation for Celiac Awareness.

Once FDA settles on an official number, the hope is that use of the term gluten-free will become more standardized.

Companies that aren't currently catering to this market may want to rethink their strategy. The gluten-free community is growing. On the disease side alone, as many as three million Americans have celiac disease-and many more will learn that they, too, suffer from it.

"Right now, about 95% of the people who have the disease do not know it," says Baker. "Only 5% of those who have celiac disease have been diagnosed. It takes about nine years from the onset of symptoms to the time of diagnosis."

More people may find they are diagnosed with a gluten disease or allergy as awareness of gluten disorders grows. "I think it's just a part of people becoming more aware of how food affects their body," says Baker.

The cosmetics market still has a long way to go in addressing gluten-free needs. Right now, a lot of push is coming from consumers themselves, with individual bloggers and Web sites generating buzz about gluten-free beauty brands. "I think it is challenging to find gluten-free cosmetics," says Lucas of Desert Essence. "However, with the growth in blogs and other social media, the gluten-free community is passing this information on online."

Overlooking this large group of potential consumers could be a costly mistake. In a 2009 report on the global gluten-free food and beverage market, Packaged Facts estimated that sales of gluten-free products in general will reach $2.6 billion by 2012.

Also, as Krull points out, "The gluten-free market is going to be around forever."

"I think the cosmetic industry as a whole does have a long way to go [to make it easy for customers to find gluten-free products]," she says. "I've been seeking gluten-free cosmetic products for about two-and-a-half years. In that time, a few more, mostly small, companies [selling gluten-free products] have come on board or just made themselves easier to find on the Internet. It took me forever to find Afterglow Cosmetics and Monavé when I first started. Now, [an online search for] 'gluten-free cosmetics' yields more results."

Still, she stresses, "These are smaller companies. Not Revlon or Cover Girl." 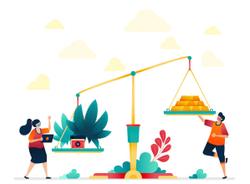