Exposure to just one stressful episode can damage nerve cell generation in animals, potentially leading to depression, according to new research supported by the National Institutes of Health (NIH; Bethesda, MD).

Exposure to just one stressful episode can damage nerve cell generation in animals, potentially leading to depression, according to new research supported by the National Institutes of Health (NIH; Bethesda, MD). Data from other recent studies, however, suggest that some supplement ingredients may help alleviate stress in humans.

In a study published in the March 14 issue of the Journal of Neuroscience, NIH researchers from the Rosalind Franklin University of Medicine and Science (Chicago) found that rats exposed to socially stressful situations had stress hormone levels that were six times higher than other rats that were left alone. To induce stress, the researchers placed the rats in a cage with two older rats for 20 minutes.

Some scientists have theorized that high levels of stress hormones may prevent the growth of new nerve cells. However, the researchers in the Journal of Neuroscience study found that while exposure to stress did not stop new neurons from growing, stress did appear to make them less likely to survive. The research team now plans to study the effects of antidepressant medications on long-term survival of new nerve cells.

“This is strong evidence that the effects of social stress on neurogenesis occur after a delay of 24 hours or more, providing a possible time window for treatment after acute episodes of stress,” according to Henriette van Praag, PhD, a staff scientist at the Salk Institute for Biological Studies (La Jolla, CA) who was not part of the study.

Phospholipids are currently being tested for their effects on memory and cognitive function. In 2003, FDA allowed products containing the phospholipid phosphatidylserine (PS) to bear qualified health claims stating that it may reduce the risk of dementia in the elderly. However, the agency added that the science supporting the claim is very limited and preliminary.

In May, Lipogen (Haifa, Israel) launched a new phospholipid ingredient, Lipogen PAS, which contains PS along with phosophatidic acid. The ingredient, which is generally recognized as safe (GRAS) for use in foods and beverages, was the subject of a study published in the June 2004 issue of the International Journal on the Biology of Stress that examined the effects of phospholipids on mental and psychological stress.

In the study, four groups of 20 volunteers received either a placebo or 400, 600, or 800 mg of Lipogen PAS before being exposed to the Trier Social Stress Test (TSST). According to the researchers, subjects who received the placebo experienced an increase in stress hormone levels during the TSST, while those who received 400 mg of the supplement experienced lower stress hormone levels. The researchers concluded that PAS has a stress-dampening effect on the pituitary-adrenal axis and may have potential as a tool for alleviating stress.

Lipogen CEO David Rutenberg notes that exposure to long-term stress and high cortisol levels can lead to problems such as obesity, high blood pressure, and diabetes. Lipogen PAS improves the functioning of the body under long-term stress conditions, he adds, without affecting alertness or ability to act.

“The reduction of stress-related cortisol levels, plus the improved functioning in the group treated with PAS, shows much promise,” says Rutenberg.

Stress doesn’t have to be psychological. In a small study that was recently published in the February/March issue of the Journal of Strength and Conditioning Research, scientists reported that a specific form of the amino acid L-carnitine reduces metabolic stress and promotes muscle recovery after exercise.

To test the effects of supplementation on physical stress and recovery, researchers from the University of Connecticut’s (Storrs, CT) Human Performance Laboratory gave eight healthy volunteers either a placebo or 1 or 2 g of L-carnitine L-tartrate for three weeks and took blood samples after the volunteers participated in resistance exercises. Lonza (Basel, Switzerland) supplied its Carnipure L-carnitine L-tartrate for the study.

The researchers found that both the 1- and 2-g doses lowered various markers of stress, including hypoxanthine, xanthine oxidase, myoglobin, and overall muscle soreness. While the 2-g dose provided the highest serum concentrations of L-carnitine, the researchers concluded that both doses were effective.

The initial results from each of these studies are promising, but more data involving larger numbers of people and longer durations are needed. While supplement ingredients like PS and L-carnitine won’t remove stressful situations from everyday life, they may help consumers feel more empowered to tackle the future. 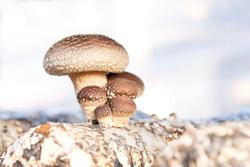 All mushrooms are magic