For manufacturers, the wellness-product industry is fraught with processing challenges caused by the inherently sensitive nature of bioactive substances. Some concerns include managing the stickiness of bioactives such as lipoic acid, which gums up processing equipment and slows down processing lines; managing the hygroscopic nature of botanicals and some minerals; preventing the premature reaction or release of ingredients when combined; and preventing the damaging effects of environmental conditions such as heat, oxygen, moisture, light, or pH. Failure to control these factors may result in products that have a short shelf life, lose their potency, taste or smell bad, release too quickly, and/or don’t deliver on their therapeutic promises because of reduced bioavailability.

Microencapsulation is a processing aid that has an excellent capability to protect bioactive molecules against temperature, humidity, and acidic conditions and allow a controlled release of these compounds during passage through the gastrointestinal tract. Analysts predict that microencapsulation as a delivery tool will have a market potential of $39 billion by year 2015 and that there will be increased interest and adoption of microencapsulation as a delivery system by the functional, infant, and healthfood industries-markets for which fortification ranks important and especially for which nutritional and therapeutic bioactive ingredients need to be protected against taste, nutritional, and flavor degredation. Microencapsulation technology is becoming the most successful controlled delivery system that is allowing nutritional supplement manufacturers to meet consumers’ needs for healthy ingredients.

For example, microencapsulation protects vitamin C (ascorbic acid), probiotics, and enzymes from traditional losses during processing and storage and delivers these nutrients in a highly bioavailable form for use in different fortification applications. Australian researchers reported that microencapsulation of three bioactive compounds had no effect on gastrointestinal passage of the compounds; however, there were increased levels in the liver and blood of rats, thereby indicating increased bioavailability of the compounds.

You can also shield nutrients from: 1) Temperature and pH changes, 2) Microbial degradation, 3) Degradation and undesirable interactions, 4) Air, light, and metal to maintain potency, and 5) Nuisances like dust.

Microencapsulated ingredients can be designed to release core bioactives through a variety of mechanisms. Coating materials can be selected to dissolve slowly or quickly in stomach acid, or only when a certain pH is reached. Additionally, coating materials can be engineered to dissolve quickly as an ingredient absorbs the moisture in a food. In other applications, such as chewing gum, mechanical compression can release a protected flavor, such as citrus. Microencapsulation enables formulators to strike the proper balance between ingredient protection/stability and release, contributing to improved bioavailability.

Protect Labile Nutrients: Some raw ingredients are especially sensitive to environmental conditions. Ascorbic acid and ferrous compounds are good examples. Vitamin C is very labile, and many aspects of processing destroy its stability. Unprotected ascorbic acid is readily oxidized and loses its potency when exposed to air. Losses in potency are exacerbated under complex processing conditions such as tableting and extrusion. Likewise, ferrous compounds such as ferrous sulfate oxidize readily when exposed to air. The resulting compound becomes rancid and loses its activity.

Microencapsulated ascorbic acid, through its increased stability in air and more gradual release over time of its antioxidant (oxygen-scavenging) properties and stabilized coated ferrous compounds, is a convenient method to provide added nutritional value through product fortification.

Gut Health: Probiotics (beneficial bacteria) is another category of very unstable ingredients. Live organisms are very difficult to work with because they are so susceptible to oxidative losses. Many probiotic products on the shelf today are not viable; the organisms are no longer there in the quantities to be useful because processing and storage have killed them.

Fortunately, recent advances in microencapsulation technology have allowed for excellent shelf stability and viability of live beneficial bacteria, even through food processing (hot and cold systems), and prolonged shelf life. Moreover, microencapsulation can protect the organisms during baking and low pH in gastric fluids, and can release the organisms lower in the intestinal tract where they provide the greatest health benefit.

Oil-Based Ingredients and More: Indeed, there are many oxidative-sensitive materials that are very important in human nutrition and health. Omega-3 fatty acids are an example. Additionally, anthocyanins have been shown to protect against oxidative damage from superoxide radicals, hydrogen peroxide, and other oxidants. Here, too, microencapsulation makes it possible to stabilize very unstable bioactive substances so they can be included in different end-use applications and deliver their expected potencies.

Taking it yet another step, microencapsulation allows oils to be used in many more delivery systems by converting the oil to a free-flowing powder, if required. Marketers are no longer limited in the product forms they can use to sell these ingredients. Oil-based products can go beyond softgel capsules, to tablets, two-piece capsules, nutrient bars, and powdered beverages, to name a few.

Masks Taste and “Off” Odors: By using proprietary new microencapsulation technology, individual particles are coated with a thin film which permits ingredients, such as branched-chain amino acids like L-glutamine, green tea extract, resveratrol, choline, caffeine, fish oil, flax seed, B vitamins, minerals, and other ingredients to be incorporated in different finished products-without “off” tastes and odors. Product developers can now formulate without the chalky taste of calcium, for instance, and consumers can still enjoy the health benefits of exotic herbs, without the bitter taste. They can still get a taste of pepper with all of its benefits, without the characteristic peppery taste.

Microencapsulation technology is also used to coat B vitamins and minerals to mask their typical bitter and metallic tastes and, as mentioned earlier, to prevent the oxidation of iron to overcome rancidity and “off” odors and mask objectionable colors, permitting manufacturers to use the ingredient in end-products.

Beverage manufacturers want to provide consumers with cost-effective energy. They seek the ability to create energy-providing products, like caffeine, in water-based delivery systems. They want caffeine without its taste, and they want the microencapsulated coating to release in a beverage solution. While such a need is apparent to product developers, the technological challenges of meeting this need are enormous. The potential exists to use robust water-soluble-based microencapsulation techniques to accomplish this need.

The ability of microencapsulation to expand areas of application-from color masking, preventing oxidation, taste masking, and shelf life stabilization-and to drive innovation in areas of use such as biocatalyst immobilization stability will fuel new and exciting growth opportunities for microencapsulation technology. What if various immunoglobulins can become more stable so that their health benefits can be fully realized, cost effectively? What if a sustained-release sleep formula can be developed that will trigger release of different bioactives that have an effect on sleep? What if energy can be sustained over 8 to 10 hours? What if a myriad of bioactives blended together can be microencapsulated to provide functionalities such as improved taste, better stability, and protection from oxidation, while delivering greater bioavailability, all in one core? There will be a trend towards the delivery of several bioactive ingredients in one core matrix. This is also cost effective. Microencapsulation as a technology has enormous untapped potential to solve challenging formulating issues.

Microencapsulation is changing the way product developers create new food and supplement products. Many doors have been opened because microencapsulation technology can regulate, shield, and deliver bioactive substances in precisely defined ways. The ultimate question for manufacturers and consumers remains, however, “What is the value of using microencapsulated ingredients to improve stability and subsequent bioavailability?”

This value proposition can be tested in many ways, some more objective than others. Clearly, using 10 times the starting dose of raw ascorbic acid in order to have enough to meet label claims after six months is a quantifiable cost that can add up. Iron can be highly reactive in foods, especially in its most bioavailable form, ferrous sulfate. Nearly all commonly used minerals for fortification (zinc, copper, iron) present problems and are easily overused unless scaling is controlled.

Avoiding the bad taste and odor of a raw ingredient such as green tea extract, caffeine, B vitamins, metal compounds, and amino acids, for example, by using a microencapsulated form adds cost to the finished product. However, manufacturers wary of this cost may want to ask themselves this question: If the product never sells because of its bad taste, less than adequate shelf life, or loss of potency, then it becomes another product failure. Therefore, what is the cost of product failures and false promises? Microencapsulation should be considered when asking that question. 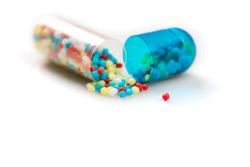